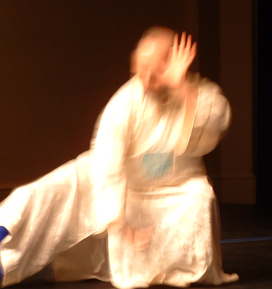 Richard Leirer is one of the most experienced and accomplished Qigong teachers in the US. He has been a serious student and practitioner of the internal arts for over 50 years. He is considered by many to be one of the few American Qigong Masters.

Richard has been actively involved in the promotion of Tai Chi & Qigong in the United States.  With 50 years of cultivation Richard has devoted his life to promoint Tai Chi and Qigong. He was the founding vice president of the National Qigong Association (NQA). He was chairman of the standards committee of the NQA and created a consensus of national standards in Qigong.

Savelli was a research subject at Duke University, the Psychical Research Institute, and the Mind Science Foundation in San Antonio, Texas. Positive results of his work have been published in Research in Parapsychology,[2] the Journal of Parapsychology,[3] as well as by the Parapsychology Department of JFK University. Savelli has also authored an introductory text on the Spiritual, Mental, and Physical Teachings of Chinese Kung-Fu.

2. Accepted as a student with Master Huang, Tzeng-yu,

Richard began his training with Master Huang in 1976. Richard was invited to teach after 10 years of training.

Master Hu Wei-Yue was born in Shanghai in 1925. He began he martial arts career as a young child and eventual he began studying under Master Hua Chun-rong, a former chieftain of the imperial governor’s guards before 1949. Master Hu then trained under Bai Bing-ru, who studied Yang style Tai Chi with Master Ye Da-mi and Yang Cheng-fu himself. Master Hu studied Sun style Xing-yi and Bagua with Sun Cun-zhou, Sun Lu-tang’s son. With this intensive research, training and practice, Master Hu learned all three styles.

As a Professor of Engineering at Beijing University of Science and Technology, he learned from and supported a young man who exhibited great Qigong abilities, Grand Master Zhong, Hong Bao  .This master demonstrated his extraordinary abilities many times in China and later in the US. See:  Palmer, David A. (2007). The Rise of Zhang Hongbao. Qigong fever: body, science, and utopia in China. pp. 146–150. ISBN 9780231511704.

Currently  Master Hao  is privileged to be guided by a woman centenarian, Grand Master Huong, who lives as a recluse in China. In 1988, Master Hao arrived in America where he began the task of spreading Qigong knowledge to Americans.

Richard was one of Master Hao’s first students in the USA in 1988 and received special training and Qi Induction. Richard was Certified to Teach Taoist Inner Tao Arts Cultivation Methods.

Richard studied in China, and was certified as an instructor of Wu Ji Qigong by the late Master Zhu Wei from Tien Tai Mountain.

Richard was one of the first to create programs in Qigong Tai Chi Therapy for pain management and surgery rehabilitation for the world famous Cleveland Clinic.

Richards research programs for the VA Hospitals for Vets with PTSD showed the effectiveness of Qigong and Tai Chi as a leading stress reducer. The active attention needed to perform Qigong and Tai Chi helped the client move the thoughts away from the stressor and onto the movements at hand. The movements increase stress relief chemicals like serotonin and dopamine, creating a calmer and more relaxed individual.

Richard is considered a leader in the complementary and alternative medical field and has worked his whole life to create healing programs for those in need.